Chiwa Harusaki (春咲 千和 Harusaki Chiwa) is one of the main female characters of the Oreshura series. She is a first year high school student and the childhood best friend of Eita Kidou who she has a crush on and she is sometimes jealous of Masuzu Natsukawa.

Chiwa has orange hair that is mostly let down, but there are two small sections of her hair are tied usually with ribbons and red-violet eyes.

She is seen wearing a red collar around her neck. Her friends often call her 'chihuahua' (Chiwawa), due to her petite stature and two ponytails that resemble puppy's ears.

Chiwa is quite possessive when it comes to Eita Kidou as she demands permission to date him from Masuzu Natsukawa, and she even argued that she knows him better than Masuzu does. This is also shown a lot because Chiwa tends to get angry at anyone who is with Eita.

She thinks about food everyday, and always comes over to Eita's place for food, since she is a terrible cook herself. She also loves meat. She wants to be popular with males, and tries to stand out.

She is often seen being either happy or angry.

Chiwa used to be in the Kendo Club until the last year of junior high school, and during the summer, she got a critical injury that wouldn't allow her to play. Therefore, she couldn't play in matches or join any sports teams. She met Eita Kidou one year after Ai Fuyuumi did, and the two became childhood friends.

Eita is Chiwa's childhood friend whom she met during first grade, nine years ago. She always comes over to Eita's place for food, since she is a terrible cook. She lives right next door to Eita's place. She is deeply in love with Eita.

Eventually, he likes her as a sister. In the last episode Chiwa kissed him, and he was taken aback, not understanding what happened. She then repeated that she loved him, which was a bit of a running gag throughout the entire series. After the confession, he seemed to be about to go back in, possibly for either some sort of embrace or another kiss.

Chiwa considers Masuzu as a love rival. They often quarrel for Eita's attention and affection, but they become friends.

Despite their rivalry, Chiwa managed to befriend Ai. 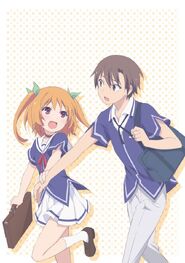 Add a photo to this gallery

Retrieved from "https://oreshura.fandom.com/wiki/Chiwa_Harusaki?oldid=6707"
Community content is available under CC-BY-SA unless otherwise noted.